I recently went to Belcampo Farms’ “Meat Camp,” up near Mt. Shasta in Gazelle, northern California.

Over the course of a few days, some Instagram pals and I were able to get a sense of their operations, how they raise their animals and how delicious their proteins are.

The camp itself was pretty awesome. Home base was a nicely appointed “glamping” style tent that can sleep two, outfitted with extremely comfortable beds.

I was more comfortable here than I was in the hotel that I stayed at in San Francisco prior to the drive up. There are nice modern bathrooms with hot water showers near the tents too, so you’re not roughing it in some outhouse or washing up in a lake.

Here’s the event barn and main lawn, where most of the action took place:

Okay so let’s get down to business:

Belcampo Meat Co. is a 100% grass fed and grass finished organic beef producer. They also raise lamb, pork, chickens and turkeys, but they run about 3200 head of cattle total, including their cows, calves and bulls.

The animals are generally about 24 to 30 months old when they reach market weight, after which they go off to Belcampo’s processing plant in nearby Yreka. Most of their beef grades out at USDA choice or select in terms of marbling. However since intramuscular fat (marbling) isn’t a priority for Belcampo in the way that it is for traditional beef producers, the grading almost doesn’t matter.

This was the best tasting grass finished beef I’ve ever had. Truly outstanding!

As you can imagine, at a place called “Meat Camp” your daily scheduled activities are pretty awesome if you’re a raging carnivore like me.

We broke down a beef forequarter, which included the chuck and rib sections.

We also broke down a lamb shoulder, pork shortloins/t-bones, and chickens.

We portioned out chops for grilling, as well as ground up various meats for burgers and sausages.

We even made sausage and tasted several of their incredibly delicious cured meat products with a charcuterie and wine pairing lesson. I think these bites were my favorites of the entire trip!

One of the many impressive things up at Belcampo is the fire wagon, which they use to develop embers and natural charcoal for cooking on their Argentinian style grills, their huge cauldron, and their “Asado Crucifix,” (all of which are made by NorCal Ovenworks).

At breakfast on the last morning, everything was lit and ready to rock. The versatility and creativity of cooking with open flame was on full display for all to witness.

Another fun lesson was about how they make their “bone broth” and sauce bases, like ragu and soffrito.

When we weren’t cooking, eating or butchering, we toured their farms, fields, and animal paddocks, which consists of about 5,000 acres of grasses and alfalfa.

We also visited the farrowing barn where newly born piglets were nursing from sows.

Just nine months later those babies are pushing 500-600lbs from eating a mixture of pasture, grains, acorns and nuts on the farm.

We saw their chicken train cars and barns, with the animals truly “free range” feeding on bugs, seeds and grasses.

I even got to see their turkeys along the road when I was out for a morning run. 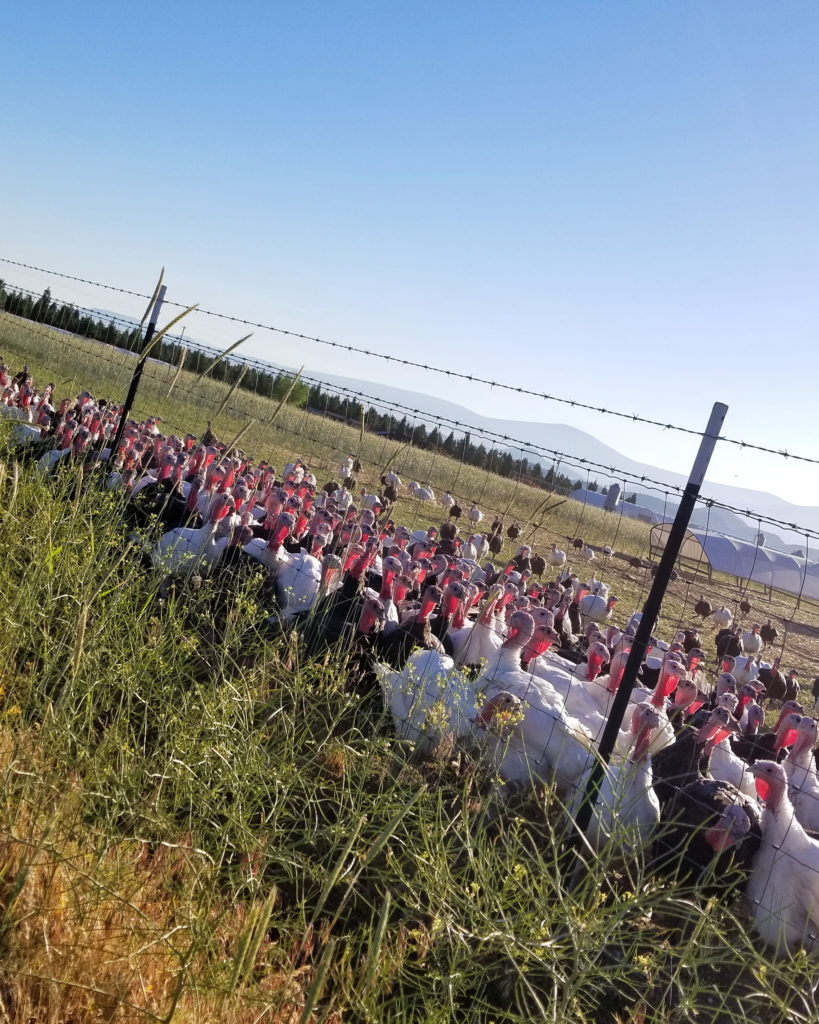 Belcampo goes above and beyond to make their animals comfortable, and they exhibit the utmost respect for the environment. The farm is run like a family, and the love and care they give to their animals translates directly into a high quality product at the end of the animals’ lifecycles.

I think my biggest takeaway – and by far the most important one – is that not all grass-finished beef is the same. I had it in my head that I wasn’t a huge fan of the taste of grass-finished beef, but Belcampo’s product is truly amazing. They definitely changed my mind on that, but their other proteins and products are outstanding as well – especially that charcuterie!

This was a really great experience, and I’m looking forward to going back in the future for their advanced camps and specialty camps. If you can’t book a trip and get out to meat camp, you should still hit Hudson Yards in NYC to try the new Belcampo restaurant there. I know I’ll be going often!

New in the Shop