The Bavette steak (France) is also known as flap steak (USA), vacio (Argentina) and sirloin tip (New England); it seems that different regions of the US and the world at large call it by different names. While the phrasing “flap steak” might sound revolting, I assure you that this cut is delicious when butchered and cooked properly. Anatomically close to the flank and skirt steaks, flap meat is technically found near the intersection of the bottom sirloin, short loin and flank parts of the animal, only it is more tender than both flank and skirt steaks due to being located on the inside portion of the diaphragm.

Here’s a video of it being butchered out:

It’s a slightly thicker cut than skirt or flank, which come from the plate and diaphragm areas nearby in the anatomy of the cow. The Bivette is more tender than both of them. It has less stringy, less chewy fat than skirt, as the striated muscle in Bivette cuts tend to have better quality marbling. It does have a direction or grain to the musculature, though, so cutting on the bias is the best technique.

Similar in texture and taste to a hanger steak, the Bavette is best prepared with high, dry heat and served medium rare. I’ve tried this great, wallet-friendly cut at Quality Eats in Greenwich Village. Here’s a pic from that meal:

As you can see, it has a great crust on the outside with a nice pink medium rare center.

This was cooked perfectly, and I highly recommend heading down there to give it a try if you haven’t done so already.

The Denver cut, or under blade steak (as opposed to the top blade or flatiron steak), is part of the chuck that is very tender and highly marbled. It’s also referred to as “zabuton” by people from space, in the future (aka Japan). 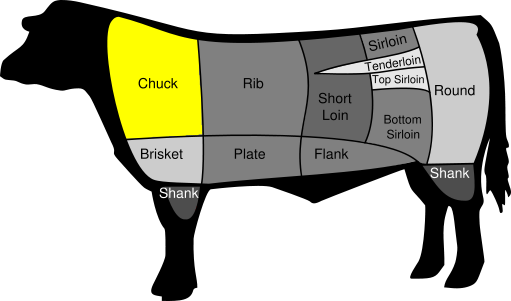 While not as tender as the teres major in the shoulder, this cut offers something unique in terms of texture.

The intense spider web marbling is perfect for long, low heat, slow cooking techniques that allow for the fat to melt and render, which thereby tenderizes the remaining muscle flesh. On the other hand, the meat is tender enough that you can also quickly sear it with high, dry heat in a pan and slice on the bias once it hits medium rare. Perfect for sliced and plated steak dishes, or even fajitas.

I’ve tried this cut at The Pines in Brooklyn, where they sous vide the steak for many hours to render out all that flecked marbling. Once it tenderizes, they sear it hot and hard to get a good crust on the outside. Finally, they slice it up and shave some horseradish on top.

I highly recommend trying this cut of beef if you see it in the grocery store or on a restaurant menu. The good thing is that it typically costs much less than other, more common cuts that you might see.

Etymology: There is some difference of opinion on the origin of the word “Porterhouse,” with several restaurants and cities claiming to have created the name. For example, Martin Morrison served large T-bones in his Pearl Street (Manhattan) “Porter House” around 1814. This history was popular in the late 1800’s, but some say a Cambridge, Massachusetts proprietor by the name of Zachariah B. Porter added his name to the steak. Still, others argue that the Porterhouse name stems from various 19th Century U.S. hotels or restaurants called Porter House, such as the Porter House Hotel in Flowery Branch, Georgia.

Anatomy: The Porterhouse is a cut of steak from the short loin portion of the animal that contains both strip loin and tenderloin meats. See the highlighted portion in the diagram below:

It is cut from a lumbar vertebra that is sawed in half through the vertebral column.

The downward prong of the “T” is a transverse process of the vertebra, and the flesh that surrounds it (spinal muscles) makes up the meat of the Porterhouse.

Essentially, it is a large T-bone steak from the rear of the animal that has two different types of meat (tenderloin and strip loin), one on either side of the “T.” In the picture below, the strip loin or Strip Steak is on the right, and the tenderloin or Filet Mignon is on the left.

The small semicircle at the top of the ‘T’ is half of the vertebral foramen, which is the name of the hole that passes through each vertebra for housing and protecting the spinal cord. They run the whole way up the back, all the way up to the brain of the animal.

The anatomy of a Porterhouse differs from that of a T-bone only in that the Porterhouse contains a larger portion of tenderloin than its T-bone counterpart.

Here is a shot of a short loin with multiple vertebrae still intact and not portioned out into individual Porterhouses and T-bones.

You can see on the left there is a good sized, thick portion of tenderloin. That thins down as you move the the right, and seems to disappear by time your eyes reach the far end of the cut.

Just to drive home the anatomy a little more, here is a great excerpt and image from Russ Cooks:

“Up close and personal, this is where the T-bone fits.

The black line across the top of the two T-bones pictured here is the outside (top of the back) of the steer. You can see the T-bone in the schematic illustration higher up on this page as the topmost part labelled Rib. Above the ribs, what you touch if you pat the steer’s back, is the New York strip. Beneath the ribs is the tenderloin from which a filet mignon is often cut. T-bone steaks cut closer to the shoulder are known as Porterhouse while those cut closer to the loin are just T-bones.”

Preparation: Most times, T-bones and Porterhouses are either grilled, seared in a pan, broiled or blasted with high heat in specialty steak ovens made for charring the outside of the meat without over-cooking the inside. Butter is essential, and heavy seasoning is important as well. Herbs and garlic help boost the flavor too.